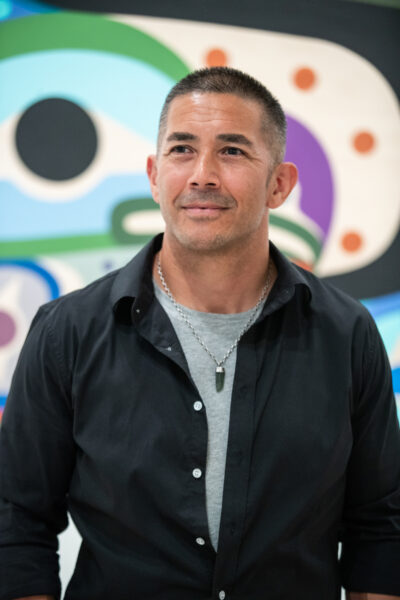 Steve Smith learned the fundamental structure of Kwakwaka’wakw art as a teenager. He worked for his father, the artist Harris Smith (Lalkawilas,) for many years before branching out as an experimental and creative voice in native art.

Considered a bold and adventurous contemporary artist throughout his career, Steve has found great success in bringing his unique style of Northwest Coast art to the world. He has held multiple solo shows, participated in major exhibitions across the continent, and has completed two monumental installations for the world-renowned YVR art collection in Vancouver, BC.

In early 2013, Steve underwent life-threatening surgery that profoundly affected his outlook on his art and his life. He was invigorated by the beauty and warmth that surrounded him, and decided to focus on capturing the moment, living in the now, and never taking anything for granted.

This emotional and spiritual challenge has resulted in a magnificent perspective on traditional and contemporary indigenous artwork. He plays with color and form in ways that allow him to powerfully bridge the gap between ancient tradition and modern art.

Steve resides in Vancouver, BC with his wife and daughter.

In October 2021, Steve was honored to become the 2021 Global Eye Award Winner at the International StART Art exhibit in London, UK. He is the first indigenous person to be given this prestigious distinction.