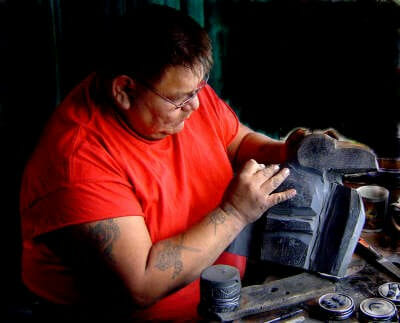 Myles Edgars was born in 1958 in Queen Charlotte City on Haida Gwaii in British Columbia, Canada (Haida Gwaii was formerly known as Queen Charlotte Islands) to Haida parents Jimmy and Minnie Edgars. He began to carve argillite when he was just 13 years old. Myles learned many points of technique from his brother-in-law Steven Collison, also a fellow Haida artist. He was taught to make his own tools by Richard Yeltatzie, a young Haida artist who passed away tragically in a plane crash in 1974. Myles has lived on Haida Gwaii his entire life. He greatly enjoys creating works out of argillite. He especially likes to create jewelry pieces, including pendants and earrings. His work is found in fine galleries along the Northwest Coast.