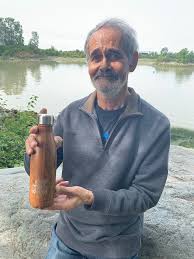 Terry began to carve with the artists of the Royal British Columbia Museum Carving Shed, which served as an education centre for the museum, as well as training young artists and oversaw many international commissions directed through the museum. Terry assisted on the growing number of commissions, many of which were for both Expo ‘86 in Vancouver and various sites around the city in preparation for the worlds fair.

Terry chose to concentrate on carving full time and began an investigation into his own Tsimshian style. At the same time he continued to assist with commissioned works given to other artists. He moved to Vancouver to receive greater exposure for his work and was immediately offered the commission to paint the housefront design for the Tsimshian longhouse at the Canadian Museum of Civilization in Hull, Quebec. He continues to carve and paint full-time and is a also a respected printmaker.