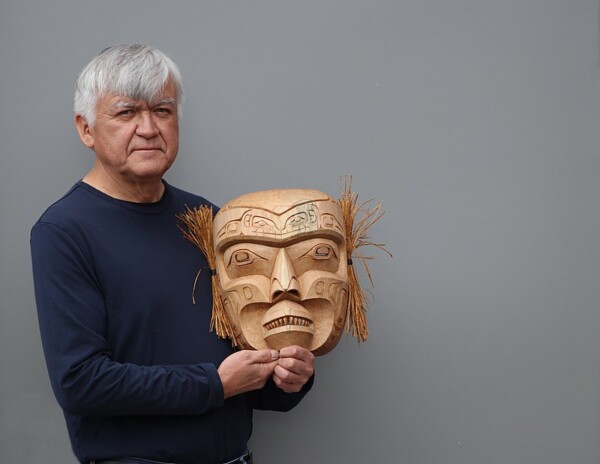 Stan Hunt is a Kwaguilth artist from Fort Rupert, near Port Hardy British Columbia, Canada. His Grandfather, Mungo Martin, his father, Henry Hunt and his brothers Richard and Tony Hunt are all artists of international stature.

Stan was born on September 25,1954 while his father was working for the Royal British Columbia Museum in Victoria B.C. When Stan was thirty years old he was initiated into the Hamatsa Society and danced in the cedar bark ceremony for the first time.  He first learned to carve toy boats and canoes.  In 1976 Stan asked his father if he could be a carver.  Henry replied, “The first thing you have to do is make your own tools.”  Stan spent the next three years learning knife techniques and carving plaques for the Victoria tourist trade.  He also assisted his father on six totem poles.  His interpretation of the Kwaguilth style is starkly traditional.  No power tools are used, only traditional tools, the adze, straight knife and curved knife are used.  The images are original but with traditional roots in the stories of the Kwaguilth people.  Images passed down from one generation to the next.

Stan is a committed artist.  He carves solely in the Kwaguilth style that he learned from his father and brothers.  His masks, totem poles and graphic original paintings are collected for their craftsmanship and authenticity.  Stan’s work can be found in museum and private collections around the world.