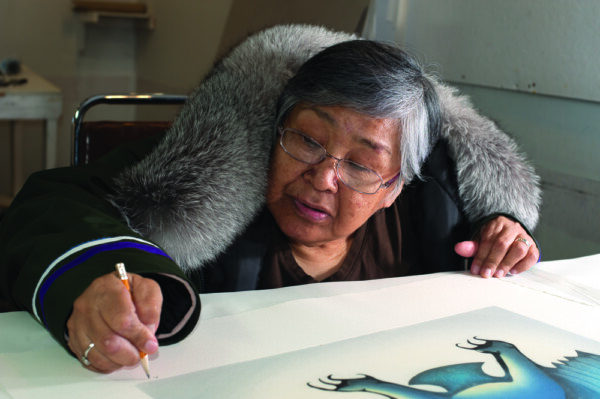 She is solely a graphic artist. Her subjects most often include people, compositions of people and animals, birds, traditional Inuit events and mythical figures and spirits.

Because of severe illness, she was exposed to southern lifestyles and cultures early on in life. She has lived in Halifax, Montreal, and Hamilton, Ontario between 1950 and 1957. During those years she learned to speak English and some French. In 1960, she married sculptor Pauta Saila.

Soon after she married, Pitaloosie started to draw. In 1968 some of her drawings were turned into print, and they have regularly been part of the Cape Dorset annual print collection ever since. Throughout her artistic career, Pitaloosie has touched upon a wide range of inspirations and has developed a personal style that can range from pure realism to abstract. Some of her works elegantly blend both styles simultaneously. Pitaloosie’s works are recognizable and uniquely striking for their unconventional style, modernist approach, and creative use of both color and texture. She uses her art to express her concerns and chronicle the traditional Inuit way of life. Even with the unique qualities of her works, they still reflect the aesthetic of the graphic art movement of Cape Dorset.

Pitaloosie and her husband Pauta lived in Cape Dorset since marriage. Pauta passed in 2009, while Pitaloosiecontinues to reside in Cape Dorset where she has an active life with her children and grandchildren.

Throughout her career, Pitaloosie’s works have been shown with great success across Canada, the United States, and France, as well as London, England; Jerusalem, Israel; Edegem, Belgium; and Verona, Italy.