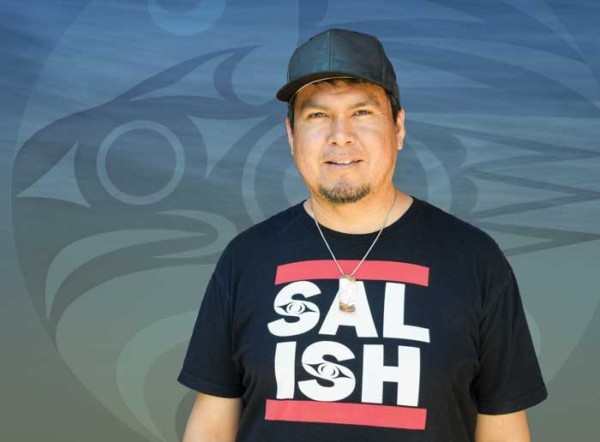 Hitler once said that the bigger the lie you tell, the more people you can get to beLIEve in it. Hitler was a proponent of racism, genocide, and imperialism, which are political forces which lessLIE is fighting against. Picasso once said that art is a lie that tells the truth. In the spirit of the trickster traditions of the Northwest Coast, lessLIE partially beLIEves in this perspective of Picasso’s.

lessLIE has a Bachelor of Arts degree in First Nations Studies from Malaspina University-College in Nanaimo, B.C. While working on this undergraduate degree, lessLIE began to study Coast Salish art. He has been studying Coast Salish art since 1995. lessLIE was greatly inspired and encouraged by his cousin Joe Wilson. Later other renowned Coast Salish arts such as Manual Salazar, Maynard Johnny Jr., Shaun Peterson, Luke Marston and John Marston influenced his artistic endeavors. However, his primary inspiration from a very young age has been Coast Salish artist Susan A. Point (to whom he is distantly related to), Robert Davidson and Lawrence Paul Yuxweluptun.

lessLIE [Leslie Robert Sam] is artistically bound to Coast Salish art traditions and mythology and his artistic style is true to form and design. His artwork can be found locally and internationally where it is being very well received by new and seasoned collectors