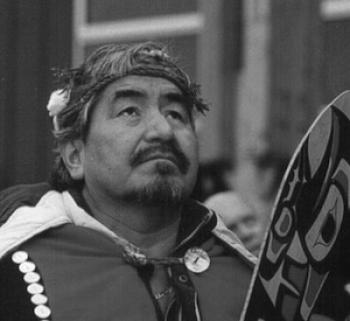 Norman Tait was one of the foremost Native Artists along the Northwest Coast. Norman was born in 1941 in the northern community of Kincolith, British Columbia. Tait’s Native name was Enah-ahg-lagh, which means Bear with no Hair on One Side. His father was Chief Joseph Tait. He learned from his family protocols, oral histories and ceremonies and had an early interest in the arts. He carved the 16.5-metre (55-foot) totem pole for the entranceway to the Field Museum in Chicago and a totem pole commissioned by the British royal family for Bushy Park in London. He carved and ceremonially raised five totem poles in Greater Vancouver, including at the University of British Columbia Museum of Anthropology, Stanley Park, Capilano Mall and the Native Education Centre. He conducted extensive research into Nisga’a art and was the foremost Nisga’a artist in wood, precious metals, and graphics.

In 1991, Lucinda Turner (b.1958) began with Norman an apprenticeship that evolved into a working relationship, collaborating on numerous pieces while both artists also produce pieces independently. They completed two major sculpture commissions for the Vancouver Stock Exchange as well as many private commissions. Their work has been included in many of the exhibitions and publications documenting the contemporary art form.