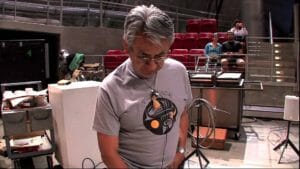 Joe David was born in 1946 at Opitsaht, a Clayoquot village on Meares Island on the West Coast of Vancouver Island. He is a member of the Tla-o-qui-aht Band of the Nuu-chah-nulth people.  His father, Hyacinth David, was a respected chief and elder of the Clayoquot nation. He moved his family to Seattle in 1958, away from the Nuu-chah-nulth territory, but they remained connected to the village and practiced the traditional values and ceremonies of his people.

Joe’s grandmother was a medicine-woman who predicted that Joe would become an artist while he was still an infant.

Joe David today is among the most respected master-artists of the Northwest Coast. Museums, private collectors, and corporations collect his graphics, wood sculpture, glass, silver, and bronze internationally. His work is identified with the modern Northwest Coast art movement. Among his close associates are teacher and art historian Bill Holm, Duane Pasco, and Frank Charlie with whom he apprenticed, and his cousin Ron Hamilton.

In 2000, he was the first artist chosen for the Aboriginal Artist in Residence program at the Pilchuck Glass School.