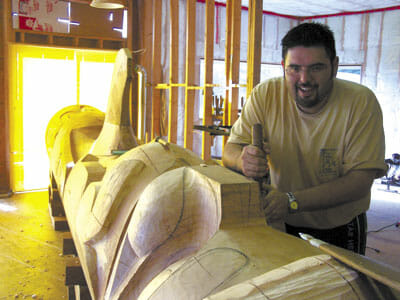 Ben Davidson, whose Haida name is ‘tlajang nang kingaas,’ meaning "the one who is known far away", is the son of internationally renowned Haida artist Robert Davidson. He began carving at the early age of sixteen and has completed a four-year apprenticeship program with Robert. He has also worked with artists Reg Davidson and John Livingstone. Ben specializes in three-dimensional wood sculpture, however he also has experience with two-dimensional works and is currently expanding his repertoire to include jewelry and engraving. His piece, a chief seat, was included in the exhibition Raven Travelling: Two Centuries of Haida Art. Ben is committed to the revival of Haida art and culture and thus mentors younger students and is heavily involved with the traditional Haida dance group, the Rainbow Creek dancers. His extensive experience as an original member of this group has allowed him to explore the relationship between Haida art and culture further. Ben currently resides in Skidegate, Haida Gwaii.