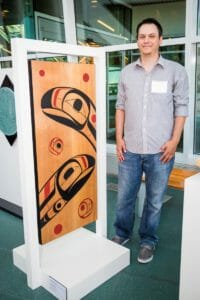 Landon was born October 6, 1981 in Kimberley, British Columbia, Canada. He has been carving since 2002.

Landon has had the honor to work with a number of highly skilled artists, including Haida artist Clarence Mills, whom he assisted on totem poles and learned to carve jewelry with. Landon has also worked on masks with Tsimshian artist Phil Gray and Haida artist Jay Simeon, who have both been a source of inspiration for him.

In February of 2008, Landon graduated from the Northwest Coast Jewelry Arts Program at the Native Education College in Vancouver, BC. The program was led by Kwakwaka’wakw & Haida artist Dan Wallace. In 2011, Landon released his first two limited edition silkscreen prints. He carves beautiful silver jewelry. His work has quickly become sought after, and can be found in fine galleries across the Coastal Northwest.