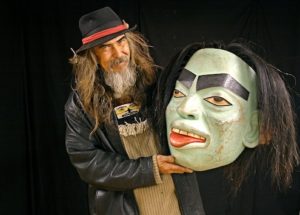 Beau Dick was born in Kingcome Inlet, a Kwakwaka’wakw village north of Vancouver Island, British Columbia. His family moved to Vancouver, BC, when he was six years old. From a young age he was heavily influenced by the customary woodcarving of both his grandfather and father.

Dick assisted his grandfather and father in carving one of the world’s tallest totem poles in Alert Bay. When Dick was 17, he was asked to apprentice under artist Tony Hunt in Victoria, BC. Eventually returning to Vancouver, he continued to hone his carving techniques under the influence of Doug Cranmer.

In 1986, Dick was commissioned to carve a mask to be showcased in Expo 86 in Vancouver. The Canadian Museum of History (formerly the Canadian Museum of Civilization) in Gatineau, Quebec, acquired Dick's mask, and it remains on display there. In 1998, he was one of only seven Canadian artists to be invited to the reopening of Canada House in London, England, in the presence of Prime Minister Jean Chretien and Queen Elizabeth II.

In the last decade, his work has been featured in a number of international exhibitions, helping introduce his pieces to a more contemporary audience. Beau's work was featured alongside that of artist Neil Campbell in the 2004 exhibition Supernatural: Beau Dick and Neil Campbell at the Contemporary Art Gallery in Vancouver, followed by the 2005 "Totems to Turquoise" exhibit in both New York and Vancouver. In 2009, the McMichael Canadian Art Collection showcased Dick's work in their exhibit entitled "Challenging Traditions: Contemporary First Nations Art of the Northwest Coast". Dick participated in the 17th Biennale of Sydney in 2010 and a summer exhibition at the National Gallery of Canada in Ottawa in 2013.