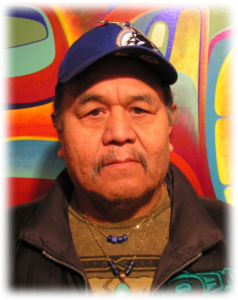 Barry was born May 22, 1952 in Kitimat, British Columbia, Canada. His crest figure is the Killerwhale. He works with a variety of media including wood, silver, gold, copper, ivory, gemstone and silkscreen. He creates beautiful carvings, jewelry and limited edition prints.

Barry and his brother Derek Wilson started to carve in the late 1950's by finishing off their uncle, Henry Robertson's, scrap pieces. Starting at the age of five under the guidance of his grandfather Gordon Robertson, Barry continued to work with wood; carving poles, masks, bowls and ladles. He then moved on to silkscreening and jewelry making in 1978.

In 1988 and 1989, Barry was awarded First Place for Original Design Jewellery in the Native Arts and Crafts Show in Vancouver,BC. From 2004 to 2006, Barry helped his uncle Henry Robertson oversee the recreation of the nineteenth-century G’psgolox pole that was made for the country of Sweden as part of a repatriation deal between Sweden and Canada. Barry was also featured in the NFB documentary 'Totem: The Return of the G’psgolox Pole'.