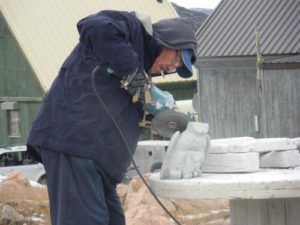 Joanasie Manning has lived in Cape Dorset all his life. Joanasie's mother, Annie Manning, has worked in the north and south as a translator for English and Inuktitut. She is also well versed in the art of sewing and doll making. Joanasie's grandfather, Osuitok Ipeelee of Cape Dorset, is a well known carver from whom Joanasie openly admits he has drawn not only his inspiration but from whom he has learnt to sculpt.

Joanassie, who began carving at the age of twenty, credits his grandfather, the renowned carver Osuitok Ipeelee, as a great influence on his work. After carving sporadically for a number of years, Joanassie is now working more consistently. He has evolved a personal style that is becoming stronger and more confident as his primary love of owls evolves through his sculpture. His depiction of owls generally with their chicks shows that despite his strength there is an underlying paternal instinct.