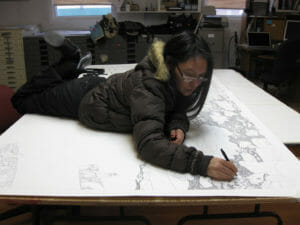 Shuvinai was born in Cape Dorset in August, 1961. She is the daughter of Kiuga Ashoona and Sorosilutu, both well known for their contributions to the arts in Cape Dorset.

Shuvinai began drawing in 1995. She works with pen and ink, colored pencils and markers and her sensibility for the landscape around the community of Cape Dorset is particularly impressive. Her recent work is very personal and often meticulously detailed. Shuvinai’s work was first included in the Cape Dorset annual print collection in 1997, with two small dry-point etchings entitled Interior and Settlement. Since then, she has become a committed and prolific graphic artist, working daily in the Kinngait Studios.

Shuvinai’s work has attracted the attention of several notable private galleries, as well as public institutions. She was featured along with her aunt, Napachie Pootoogook, and her grandmother, the late Pitseolak Ashoona, in the McMichaelCanadian Collection’s 1999 exhibition entitled Three Women, Three Generations. More recently she was profiled, along with Kavavaow Mannomee of Cape Dorset and Nick Sikkuark of Gjoa Haven, in the Spring 2008 issue of Border Crossings, a Winnipeg-based arts magazine. In an unusual contemporary collaboration, Shuvinai recently worked with Saskatchewan-based artist, John Noestheden, on a “skymural” that was exhibited at the 2008 Basel Art Fair and was shown again at Toronto’s 2008 Nuit Blanche. In 2009, her work was presented alongside Toronto-based artist Shary Boyle at the Justin Bernicke Gallery at Hart House.

Shuvinai is also the subject of the documentary art film, Ghost Noise, produced and directed by Marcia Connolly. In this annual collection of 2011, Shuvinai returns to the symbol of the egg in Sea Shell (2011-31), in which the egg shell becomes the umiak, fragile yet functional, transporting a group of happy looking people to their next destination – another world perhaps. Shuvinai’s worlds are multiple and overlapping, captured literally in World View (2011-30).

“When I start to draw I remember things that I have experienced or seen. Although I do not attempt to recreate these images exactly, that is what might happen. Sometimes they come out more realistically but sometimes they turn out completely different. That is what happens when I draw.” -Shuvinai