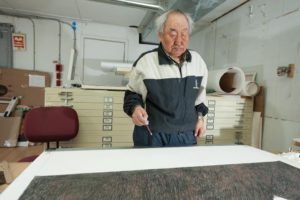 Ohotaq began drawing in the early years of the print program in Cape Dorset. His print, “Eskimo Fox Trapper” was released in 1961. He became less involved with drawing as the community grew, working instead for various community agencies in full-time wage employment. Since his recent retirement from his job as a caretaker of the Peter Pitseolak School in Cape Dorset, Ohotaq has again expressed an interest in drawing.