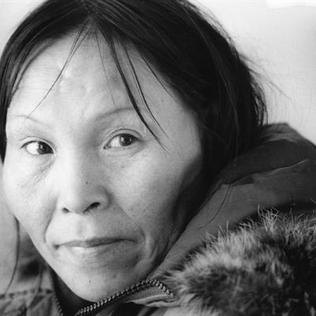 Napachie Pootoogook was a highly acclaimed artist from the Saarruq island camp in Qikiqtaaluk region, NU who began her artistic practice as a young adult. Focusing primarily on drawing and printmaking Pootoogook’s impressive portfolio of over five thousand drawings has cemented her reputation as one of the most prolific figures in Inuit art. Pootoogook belongs to a large artistic family that has significantly influenced the arts scene in Kinngait.

Pootoogook's early works focused on depictions of Inuit spirituality and stories and tended to be monochromatic or use few colours. Her later works are more colourful and her focus shifted to record Inuit traditional life, clothing and community history particularly on the experiences of women. This visual record of Inuit history can be seen in various prints including Aqaqtuq (Singing Love Song) (1993) and Katajjaqtut (Throat Singing) (2000). In Aqaqtuq, a mother and son can be seen holding hands and singing, surrounded by markers of the past, such as the ulu, scraper and caribou skin bed and markers of the present such as the clock and metal cup. In Katajjaqtut two women are immersed in the art of throat singing outside of an igloo wearing amauti and dresses made from printed fabric. Through these prints Pootoogook attempts to preserve her past for future generations to learn from and carry on those traditions. Continuing with her trend of documentation Pootoogook also produced a series of autobiographical drawings. These works were of Pootoogook's memories and stories she'd heard, some of which focused on difficult subject matter such as abuse, starvation and tragedy.

Pootoogook has been featured numerous times in the Inuit Art Quarterly and has participated in over eighty exhibitions in Canada, the United States, Israel, Italy, Belgium and France. In 2004 her work was featured in a solo tour titled Napachie Pootoogook by the Winnipeg Art Gallery. In 1979 Pootoogook was commissioned by McClelland & Stewart to create the lithographic work Inuksuit, which was included in the limited edition book Landmarks of Canadian Art. Pootoogook’s works were included in almost every Cape Dorset Annual Print Collection from the 1960s until the early 2000s. Her work is also featured in multiple collections including the Royal Ontario Museum, Toronto, ON, Winnipeg Art Gallery, National Gallery of Canada, Ottawa, ON, Musee des beaux-arts de Montreal and the Canadian Museum of History, Gatineau, QC. 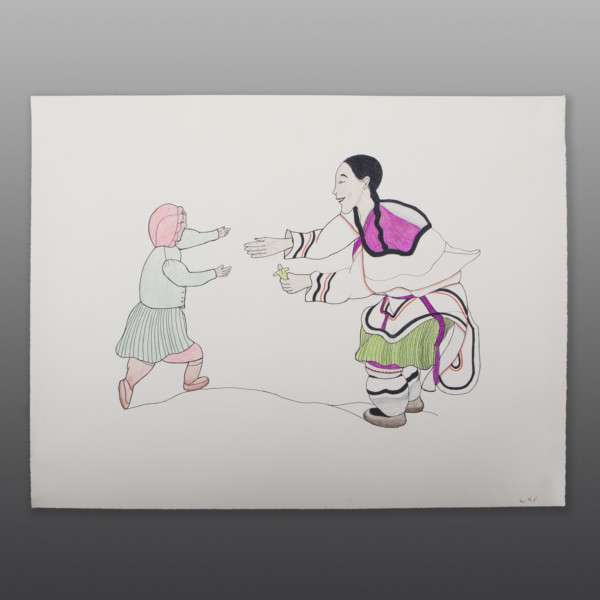