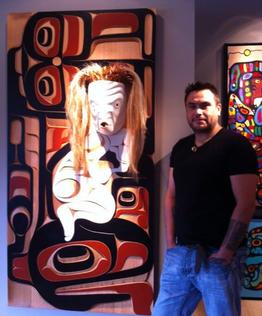 Morris Sutherland Jr. (Moy) holds two Native names. His Nuu-chah-nulth name is "hiish-miik", which refers to someone who gets whatever they are going after. Moy's second name is "chiotun". This respected name comes from the Coast Salish village of the Sliammon and translates as “someone who helps”.

He was born in 1974 in Port Alberni, Vancouver Island to a traditionally rooted family. He grew up steeped in his Nuu-chah-nulth culture and traditions. As a young man, he worked in the forests of BC and to this day, his greatest sources of inspiration are his culture and his environment. In 1995, with encouragement and inspiration from his friends and family, Moy began his artistic career in Alert Bay. He learned the principles of carving from Joe Wilson and later returned to Port Alberni, where he learned more about the Nuu-chah-nulth worldview and art styles from his uncle, Mark Mickey.

Moy has proven himself to be an intelligent and meticulous artist. In 2000, the artist began an apprenticeship with the world renowned Nuu-chah-nulth artist, Arthur Thompson. They thrived in their artistic partnership together until Arthur's death, in 2003. While working with Arthur, Sutherland gained cultural knowledge, and he continues to be influenced by Arthur’s work.

He generally works in the traditional style, but he enjoys working in a variety of mediums including contemporary ones such as silkscreen prints and jewelry. His work can currently be seen in galleries, museums and private collections across Canada and in the United States.

"For me, the meaning of life is to learn of my cultural surroundings, so that this knowledge can be preserved and used in everyday life. Like our elders before us who passed this knowledge on, so must we to our descendants. In this manner, respect becomes an integral part of life: respect for everything. I draw my knowledge and inspiration from the teachings of those I respect. I incorporate these teachings into all that I do.”