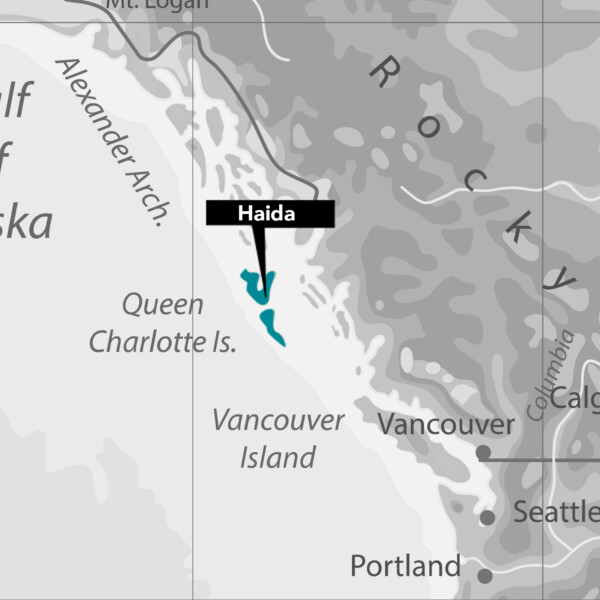 The ancestral homeland of the Haida people is the archipelago of Haida Gwaii, meaning “Coming out of concealment” or sometimes, “Island of the People. It is a mesmerizing group of islands with high mountain peaks, deeply lush forests, deep valleys, and innumerable beaches and inlets. The Kaigani Haida live in the southernmost portion of the Alaskan panhandle and have done so since migrating there from Haida Gwaii in the early 1700s. The Haida have long been considered masters in seamanship, carving large dugout seagoing canoes carved from a single Western Red Cedar tree in order to travel long distances for trade, fish, and navigate the turbulent waters surrounding their archipelago home. Some of these canoes were large enough to hold up to 60 paddlers. Through long sea journeys from their sea facing villages, the Haida have a long history of being fine traders.  On such journeys scare materials that weren’t naturally found on Haida Gwaii would be traded for and brought back to be utilized by the Haida People.  The Haida’s reputation for craftsmanship was supplemented through trade for said materials.  In contemporary art, many Haida artists work in argillite, a carbonated shale, to create pieces of art that are completely unique to the Haida and Haida Gwaii itself. This black silt stone can only be found in one deposit, Slate Chuck Creek. Detailed examples of Haida art can be found in gold/silver/copper work, spruce root hats and baskets, and totem poles and carvings of varying sizes.