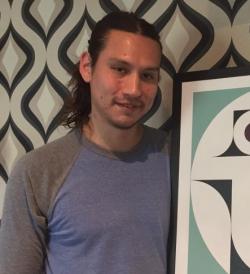 Dylan (Qwul’thilum) was born in Victoria, British Columbia, Canada in 1986. He is a Coast Salish artist from the Lyackson First Nation. Dylan was exposed to art at a young age because his family continues to participate in their culture and tradition. He has trained in jewelry design with jewelry artist Seletze, who is also known as Delmar Johnnie. Dylan has apprenticed under renowned Kwakwaka’wakw artist Rande Cook in all mediums. Rande has been a major influence in the development of Dylan’s design style. Dylan’s many other artistic influences include Susan Point, Robert Davidson, and the late Art Thompson. He is very focused on his career as an artist, and plans to make art his life’s work. His pieces can be found in fine art galleries in the Pacific Northwest, and his designs have even been featured on snowboards.