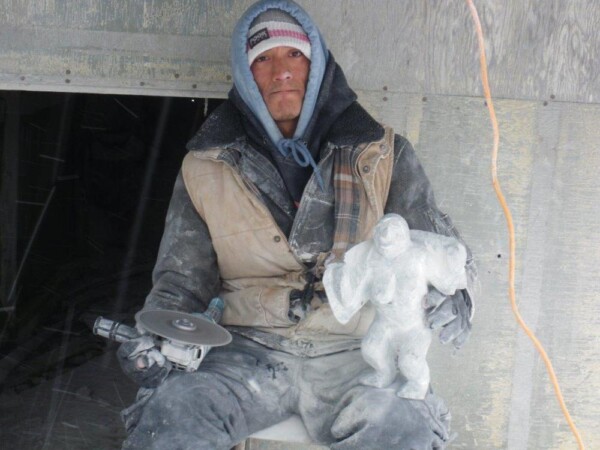 Pitseolak Qimirpik is a young Cape Dorset carver who has quickly established himself as both apprentice (his father is renowned Dorset carver Kelly Qimirpik) and contemporary artist. Indeed, Qimirpik has successfully distinguished himself through this very juxtaposition, marrying pop-culture signifiers with traditional carving. He sits at the helm of a surging generation of Inuit artists who are reconfiguring their position onto history, traditional media, and narrative figuration. It’s a group who’s establishing itself through an aesthetic more easily situated in the contemporary art world, while never fully divorced from its ancestral associations and formal base. Qimirpik, like so many of his contemporaries, continues to make the link between the two.

From the age of thirteen, Qimirpik has established himself through an exceptional craftsmanship and an attention to contemporary signifiers. Producing figures like muskoxen, drum dancers, and dancing walruses, his works are often colored by their subjects’ props or profiles. They don iPods or MP3 Players, rabbits dance to hip-hop and walruses kick up their flippers with glee. Qimirpik is falling in step with his generation’s multivalence, its double-speak, and winking referentiality. He seeks form in Inuit history, but roots his subjects in the new.