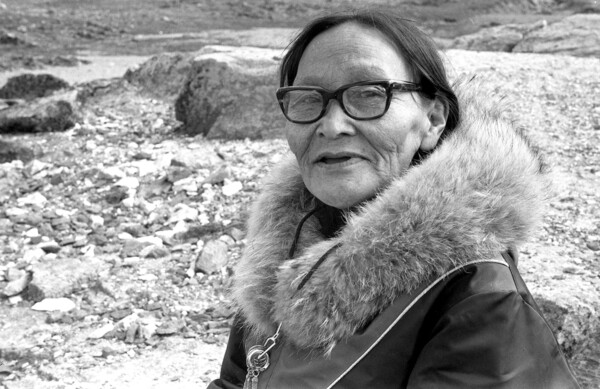 Lucy Qinnuayuak is a prolific graphic artist, well known for illustrations of her favorite theme — the bird image, either singularly or in groups, and in all sorts of situations or relationships. She also depicts other themes which spring from her personal interpretation of the Canadian Inuit traditional way of life. She was born in Salluit, in northern Quebec. At a very young age Qinnuayuak, along with her mother and sister, moved to Baffin Island, Northwest Territories, where they lived in Cape Dorset and in several outpost camps. She met her husband, Tikituk, a sculptor and graphic artist, at Supujuak camp where they enjoyed a traditional way of life. In the early 1960s they moved to Cape Dorset.

Qinnuayuak started to draw in the 1950s while living in Supujuak camp. Her drawings were turned into graphics from 1961 until 1983, excluding 1973. She also created her own plastic repertoire of forms that clearly defines the aesthetic values in her works. Over the years she has drawn all kinds of birds in various poses — the features of their eyes and feathers connecting them to each other. In her compositions movement and stability are often ambiguously juxtaposed.

At the end of the 1970s Qinnuayuak began working with acrylic paint in conjunction with other mixed media. Her compositions from that period are colorful, extremely vibrant, and powerful. They are also much more elaborate and complex with a broader story line. Qinnuayuak’s art is realistic and humorous, and it reflects the traditonal Inuit way of life.