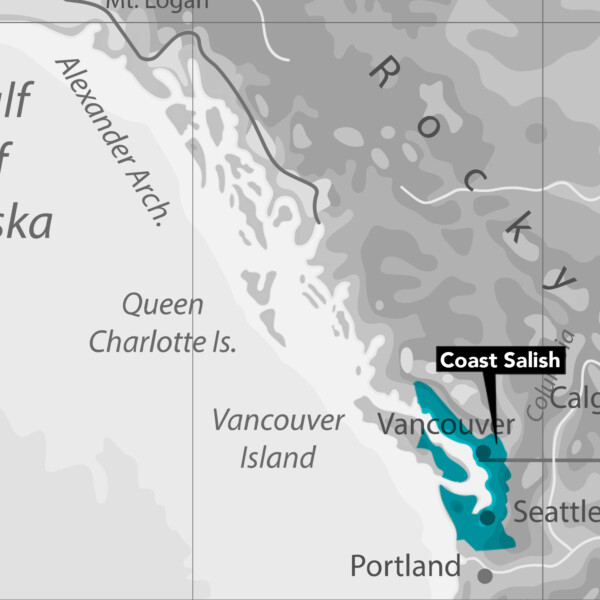 Coast Salish culture encompasses some thirty communities on the Salish Sea(Puget Sound) in Washington State and along the southern shores of Vancouver Island and the adjacent mainland of British Columbia.  Coast Salish communities are connected by a dozen related, but quite distinct languages.  These related languages are often referred to by linguists as the Salishan Dialect.  The Southern Coast Salish have two language groups, Lushootseed and Twana. The Central Coast Salish include speakers of Halkomelem, Nooksak, Klallam, and Straits languages.  The Northern Coast Salish included speakers of Sechelt, Squamish, Pentlatch, and Comox. Many of the earliest existing examples of Coast Salish Art exist on circular spindle whorls.  Weaving was an integral part in Coast Salish communities.  Weaving played an important role in Coast Salish communities in clothing, basketry, rope, and other essentials.  Coast Salish iconography is quite different from the northern formline that comes from central and northern groups.  It tends to be minimalist and is more straight forward and simple with flowing qualities.  Most Salish believed that overexposure of spirit images might dilute the powers of the beings they represented, thus producing fewer pieces of art in accordance with governed rules of secrecy. Simple design however does not equate to inferiority, but simply reflects the lifestyles of the Salish that tended to be more subtle and not feature lavish promotion through art. To this day Salish art often remains heavily enigmatic in meaning because of this secrecy.