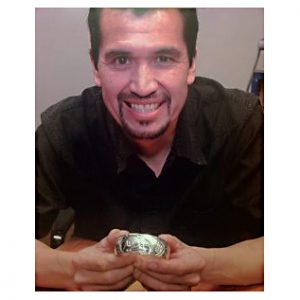 Travis was born in in Duncan, British Columbia, Canada. He is a member of the Cowichan Tribes, Coast Salish Nation. He has been carving jewelry for 16 years. Travis was mentored by Kwakwaka'wakw artist Patrick Seaweed, which has influenced his work greatly. His work reflects a blend of Kwakwaka'wakw and Coast Salishinfluences. Travis is best known for his bold, deep, clean lines and highly detailed designs. Travis’ work is on display in galleries throughout the Northwest Coast, Japan, and Europe. He currently resides in Victoria, British Columbia.