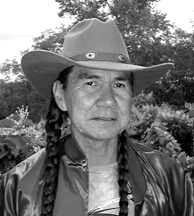 Stan Greene’s Salish culture was sleeping, and he has spent his life helping to wake it up. Best known as a carver, Stan is also an avid painter, dancer, and canoeist. Based in Chilliwack, he has built an international reputation through his artistic revival of Salish traditions. It is for his artistry and his dedication to reviving the Salish art form that Stan received an honorary doctorate from the University of the Fraser Valley in 2007.

“I got pictures of Salish pieces from the UBC Museum of Anthropology and took them to the elders and asked what they meant, but they couldn’t help much — a lot had been forgotten because of the residential schools, and because some of the traditions were kept private. I studied books of Salish art and began to teach myself the traditions. Long ago our carvers made most of what people needed, like ladles, spoons, canoes, and spindle whorls for spinning yarn, and they incorporated art into the design.”

Stan attended the K'san School of Native Art, Hazelton, British Columbia in 1977; and studied under several master carvers, including Ken Mowatt and Chuck Heit. Greene’s monumental house posts were featured at the 1986 World Expo, Vancouver, British Columbia; and in 1987 he carved a 27-foot totem pole for Yokohama City, Japan.