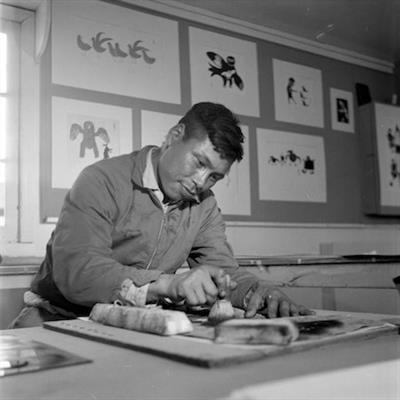 Iyola Kingwatsiak was born in Kinngait (Cape Dorset) in the Qikiqtaaluk Region (Baffin Island). He was a visual artist that specialized in the creation of carvings, drawings and prints. Kingwatsiak started to develop his artistic practice in Kinngait and resided there for the remainder of his life. Kingwatsiak commenced his artistic practice as a carver and later became known for his creation of prints in Kinngait between 1959 and 1977, as well as from 1984 to 1988. He was additionally noted for creating artworks that featured Inuit figures within northern environments and Arctic animals, such as birds, whales, walruses and bears.