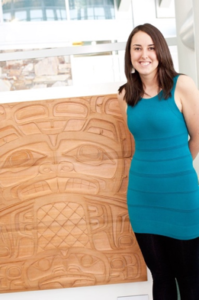 Cori was born in Haida Gwaii in 1985, but she spent most of her childhood and adolescence in Quebec and Ontario. She frequently visited the extensive Northwest Coast exhibition at the Museum of Civilization in Ottawa. This, along with consistent teaching by her mother, allowed her to remain connected to her Haida culture and her roots.  At the age of 15, Cori returned to Haida Gwaii and attended her first potlach. The experience was so moving that it sparked a passion for Haida art that continues to grow year after year.

Cori was invited to attend a long series of design courses taught by the enormously respected Haida artist Robert Davidson. She worked very diligently to master the style and skill of the art and was eventually rewarded with a scholarship from the YVR Art Foundation. In order to fully participate in the program, Cori began an ongoing apprenticeship with Reg Davidson, a famous Haida artist and brother to Robert. This relationship continues today and has allowed Cori to work in the traditional style of her culture while experimenting with her own personal interpretation of both ancient myths and contemporary observations.

The One in the Sea Cori Savard Sold